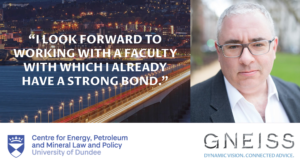 Gneiss Energy is delighted to announce that Managing Director Jon Fitzpatrick has been appointed as an Honorary Research Fellow of the University of Dundee’s Centre for Energy, Petroleum and Mineral Law and Policy (CEPMLP) within the School of Social Sciences.

Jon has longstanding links with the University of Dundee, initially graduating with a degree in Law (LL.B. (Hons)) in 1994. In 1996, he was awarded a Master’s degree in Natural Resources Law and Petroleum Economics (LL.M. (Dist.)) from the CEPMLP and from 1994-97, he was Executive Assistant to CEPMLP CEO Professor Thomas Walde.

Prior to establishing Gneiss, Jon was Senior Managing Director and Head of Natural Resources for Europe, Middle East and Africa, as well as, Co-Head of Equity Capital Markets, Europe at Macquarie Capital. Previously, he held senior posts at Cenkos Securities plc, including Head of Corporate Finance, Energy and Natural Resources. Between 2013-2015, Jon was President of The Scottish Oil Club and has been a board director since 2008. He is also an active member of various industry bodies and professional institutions.

“I am delighted to have been elected as an Honorary Research Fellow at the University of Dundee’s Centre for Energy, Petroleum and Mineral Law and Policy. The CEPMLP is world-renowned as a centre of excellence in the field of energy and I look forward to working with a faculty with which I already have a strong bond.”